Posted on January 24, 2018 by admin
Tweet0LinkedIn0Facebook0 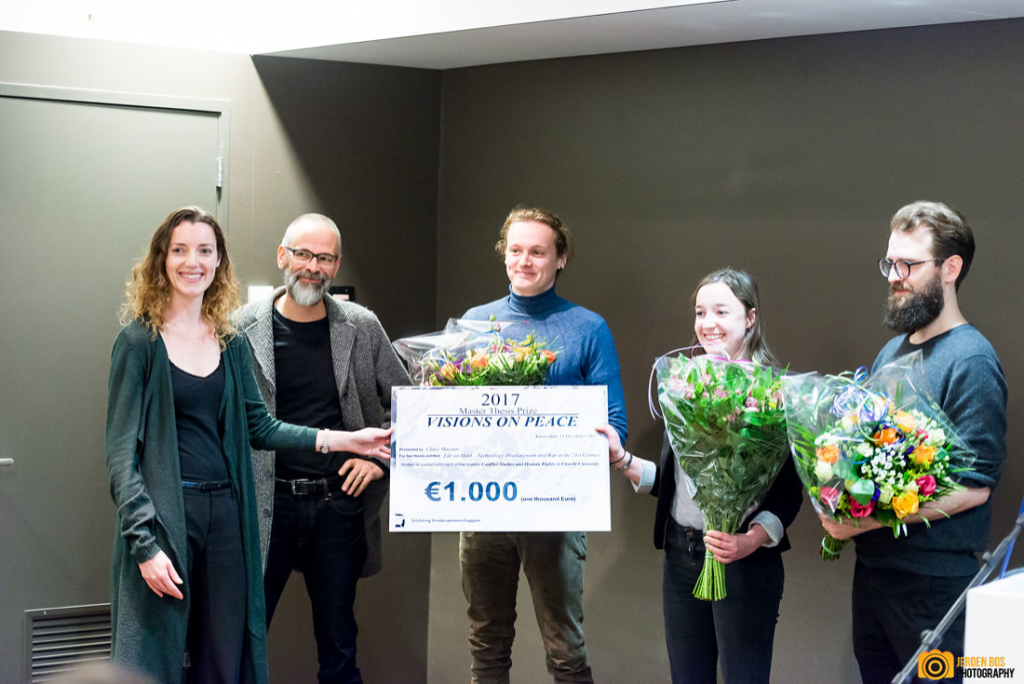 On Friday 15 December 2017, the Dutch Foundation for Peace Studies awarded the tenth Visions on Peace master thesis prize during its annual symposium. The symposium with the theme “Syria’s Seven Years of Tragedy: Peace and Conflict Studies in Times of Global Challenges”, was organised together with the Faculty of Social Sciences and the IOVIS Centre for Peace and Conflict at the Vrije Universiteit Amsterdam. The Dutch Foundation for Peace Studies wants to congratulate Clara Maciver for winning the Visions on Peace master thesis prize 2017 for her thesis, titled “Life on Hold: Technology, displacement and war in the 21st century”, written in partial fulfilment of the master programme Conflict and Human Rights at Utrecht University. Unfortunately, the HBO Peace in Practice Research Award could not be awarded this year.

Clara Maciver, the winner of the 2017 Visions on Peace master thesis prize, lived with Syrian refugees in Izmir, Turkey, in order to shed light on the stories of those at the receiving end of the EU-Turkey deal. This deal, negotiated in 2016, allows Greece to deport refugees back to Turkey. Many human rights organisations and other NGOs have condemned the deal, including Amnesty International, Human Rights Watch and CARE International. Most Syrian refugees don’t want to stay in Turkey, where they face unemployment, poor working conditions, poverty and discrimination. Many want instead to return to Syria, or move onwards to Europe in the hope of better living conditions – yet neither is possible. They are caught in an in-between-place. For her Conflict and Human Rights master thesis at Utrecht University, Clara wanted to understand how Syrian refugees in Izmir use their smartphones and how this impacts their experiences of displacement in Turkey.

Clara’s hosts, Faisal and Fatima and their families, are relatives of one of her fellow students at Utrecht University. “The experience of living with and being friends with my informant community was deeply humbling, as I was very much given the most beautiful experience of Syrian hospitality and human kindness” says Clara. The experience also allowed her to learn about the painful aspects of displacement. During her presentation, she recalls how another informant, Nora, noticed that her son had started to forget how to write in Arabic. As Nora recounts that her son wrote ‘Allahu Akhbar’ (God is great) from left to right rather than the other way round, she breaks into tears.

In the midst of displacement smartphones are vital tools. Clara found  that the Syrian refugees in Izmir used their phones primarily to keep in touch with family members still in Syria or elsewhere in Turkey or Europe, but also to help them remember their homes and favourite places that perhaps no longer exist. Facebook is a particularly useful tool that helps Syrian refugees in Izmir to form online communities that provide information in Arabic about Turkey, Syrian-friendly employment, activities and so on.

But as technology helps Syrians sidestep the structural challenges they face in Turkey – the challenges themselves remain intact.  “I learned so much about inequality and injustice in how policies agreed in Europe, such as the EU-Turkey deal, affect those at the receiving end of such agreements”, says Clara. Upon her return, she said she was struck by her own freedom of movement compared to the friends and informants she left behind in Izmir. Clara wants to continue doing research into migration and the impact of technology on refugees’ lived experiences of displacement.

Also shortlisted for the 2017 Visions of Peace master thesis prize was Josh Walmsley, for his thesis titled “The puzzles of preventing extremism: An exploratory study of enactments of the prevent duty by front-line practitioners in English schools and colleges”, written in partial fulfilment of the master Conflict Resolution and Governance at the University of Amsterdam. His work explores Britain’s Prevent counter-radicalisation programme, which assumes practitioners at the frontline of the education sector are naturally predisposed to identifying extremism. The programme doesn’t prepare educators for the practical and normative complexity of practicing counter-radicalisation in schools however, seemingly creating more division in society rather than making it safer.

The final thesis shortlisted for the 2017 Visions on Peace master thesis prize was written by Thomas Behrndt, titled: “Thinking politics in light of the algorithmic turn” in partial fulfilment of the research master Modern History and International Relations at Rijksuniversiteit Groningen. Thomas’ work presents a critical analysis of the political implications of the increasing reliance on algorithmic systems and the use of big data, particularly in security and risk management practices. “The question is,” he explains, “how these developments impact our potential to create new socio-political orders”. Thomas is excited to continue working on this topic.

The 2017 Visions on Peace jury, chaired by Lidewyde Berckmoes – postdoctoral researcher at the Netherlands Institute for the Study of Crime and Law Enforcement (NSCR), nominated these three theses for (a) how they balance theory and empirical evidence, (b) their critical reflections on important social issues, (3) the creative and original contribution made to not only their respective fields, but also the academic debate on peace and security. Clara’s thesis stood out in a number of ways. The topic is very timely in addressing the difficulties as well as the resources at hand in times of war and displacement. Whereas Clara takes a critical stance towards new technologies, she remains constructive. Her work is well-written and uses compelling arguments. Moreover, the fieldwork underlying Clara’s findings show courage and heart for peace work.

Tweet0LinkedIn0Facebook0
This entry was posted in Scriptieprijs, Symposium. Bookmark the permalink.